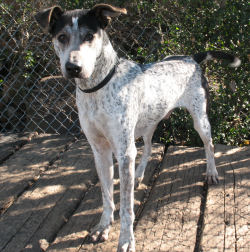 Part of dog ownership is making sure your pooch gets the right amount of exercise for his age, breed, size, and temperament. Walks are necessary, and a great activity for dogs, but walks alone won’t meet most large, boisterous dogs’ needs for exercise. Since the days of opening the door and letting Rover run the neighborhood all day are over (thankfully), having a securely fenced yard can be extremely helpful for dog owners, especially when you have large (or multiple) dogs.

A fenced yard allows for dogs to move about more freely, play exuberantly, chase each other or play fetch with you, explore freely with their senses, and generally expend larger amounts of stored energy. Unlike dog parks, which harbor lots of unknown variables, your own fenced yard tends to be a safe place to run your pooch. If your dog isn’t wild about other dogs, but has lots of energy, having your own secure yard will really help you meet his needs. (I don’t care for dog parks, and here’s why.)

A secure fence also keeps other dogs, kids, and some other animals out. It can add privacy, as well as a layer of home security, too.

But many dog owners don’t understand that fenced yards have some drawbacks, and even hazards. Let’s look at a few aspects of private yards that you may not have considered.

Dogs are moving animals, for the most part. In the wild, when they are not denned up, canids move across large tracts of land regularly, hunting, scavenging, exploring. Leashes, and by extension, fences, keep dogs from moving in as large an area as they would often prefer. Since leashes and fences keep dogs and people safe, and make dog ownership available to more people, they are a necessity—so domestic dogs must learn to live less nomadic lives. And they easily can. Once they bond to us, they don’t want to be far from us, so they accept confinement as a trade-off.

But barriers like fences and leashes can cause frustration in dogs who have not yet acclimated to them. Barrier frustration is common in domestic dogs, and it can cause mild to serious problems. We’ve all seen dogs who are being walked on leashes who lunge, growl, bark, snarl, and look like Cujo when they pass other dogs on a walk. This leash aggression (or leash reactivity) is the result of pent-up frustration at being restrained. A dog on the other side of a fence, especially if it is also agitated, can create the same response. 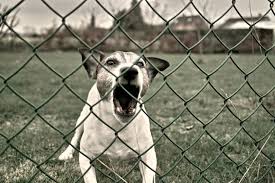 If your dog and your neighbor’s dog “run the fence” a lot, barking and getting agitated with each other, you should not sit on your patio and think, “That’s good—they are both getting exercise.” It isn’t good. Pressure is building, and that, coupled with the dog’s natural territorial tendencies, could be a recipe for disaster.

Just this week, I learned of two separate incidents from two separate dog training colleagues that happened through fences, involved serious injury, and both chilled me. In both cases, neither of the perpetrator dogs had ever had problems with other dogs besides the dogs they shared a fence with. Both were fine with people and dogs in open settings. The problem was localized to the barrier frustration, and the arousal and stress that comes with it. If you want to read about the incidents, you may do so at the end of this post*.

Just yesterday, a client whose dog I worked with years ago told me that her 2 dogs got into a pretty nasty fight while out in the yard. These are dogs who have always gotten along just fine. But they both got to chasing and barking at the neighbor’s dog on the other side of the fence, and then the larger dog turned on the smaller. This is called redirected aggression and it can be serious.

I tell my students all the time: don’t leave your dogs unattended, even in your own fenced yards. My dogs are never out in the yard when we are not home, and when we are home, they are not out for more than a few minutes without my wife or me being with them. The fence is currently secure, and none of them can get out, or want to, so why am I so cautious?

My dogs are small, so I worry about hawks or other birds of prey, mostly. I also worry about my neighbor’s cats, who love to jump over the 6-foot wooden fence and come into my yard. I don’t mind cats, but my dogs do. If they were to catch a cat, or a squirrel, or a possum, they will not leave it alone if I am not there to make them. So we watch them carefully, especially after dark. Our dogs tend to be noisy when excited, as well, and no one wants to hear a dog yapping for more than a minute or so.

If I’m there, I can call them away and keep them quieter and calmer.

Dogs left alone in yards can also be subject to kids sticking fingers through the fence to agitate them. They can ingest sticks or other items that are harmful. They can bark for hours on end. They can destroy a wooden deck, a lovely garden, a gutter system, or other property out of boredom. They may go after a meter reader or landscaper, or escape the yard when he or she enters. They can ingest items that shouldn’t be ingested—including poisoned meat that your nasty neighbor throws over the fence (yes, this happens). Dogs often need more supervision that you’d expect—especially when they are younger or are new to you. Just because the neighbors aren’t complaining doesn’t mean you are in the clear, either.

When asked where dogs should be left when no one is home, my answer is “in a crate, until they can be safely weaned out to be left alone in the house without being destructive—at a year of age or later.” There are some exceptions to this rule, but not many.

Your dog needs exercise, but he doesn’t necessarily know how to use his time wisely. Often, he needs his human to help him exercise properly. Playing fetch, playing tug, playing with other dogs (when appropriate), and playing in ways that work the dogs muscles and heart are all positive ways to fulfill his exercise needs. He needs you to help him work off that energy in positive ways, instead of neurotic ones. Use the yard together for best results.

Also, your yard may be a great place for your dog, but it doesn’t offer much in the way of novelty, which is necessary for mental stimulation. Walks can be great for this, especially walks where you work on some training as well as allow him to explore a bit.

I can’t tell you how often a dog owner tells me that they don’t need to worry about housebreaking because Rover spends most of his time in their yard. Not only does being in the yard most of the time not teach the dog how to be clean indoors, it also doesn’t teach him how to be calm indoors, or around kids, or how to behave in ways that make him a treasured family member and not a nuisance.

Your yard doesn’t give your dog any guidance. It doesn’t make him a better companion. It doesn’t teach him right from wrong. And unless you and your family spend most of your waking hours in that yard too, it works against you because your dog will do best when he is fully integrated into the household and near his humans most of the time. If he’s never allowed to be involved in your activities, how will he learn? If you don’t want to spend all your time with the dog yelling at him to stop jumping on the kids or chewing things, train him. And training requires proximity. Don’t like dogs in the house? You probably shouldn’t have a dog.

It’s easy to become complacent when you have a nice fenced yard. If you don’t have to take Rover for a walk every day out of necessity, how often will you actually do it? Too many people with fenced yards don’t walk their dogs enough, and may not be meeting the dog’s needs. It’s easy to think that Rover is getting enough of what he needs, when he may not be. He also may be getting into trouble that you may not notice right away. Walks give your dog much-needed mental stimulation. Don’t neglect them. 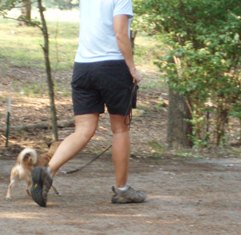 Is your dog hell on the leash? Training can fix that. It’s worth the time and effort, believe me. You and your dog will be much happier when he can walk nicely on a leash.

Doggy doors can make complacency even worse. Having access to a doggy door will not housebreak most dogs—they need to be taken out and shown where to go. After housebreaking, they may still have accidents even if they have access to the yard, especially in a large house. And for dogs who run the fence, antagonize the neighbors’ dogs, or bark for the sheer fun of it, having access to do this incredibly stimulating-but-harmful-for-everyone activity any time they want is a recipe for disaster.

Why are you such a buzzkill? Isn’t having a yard better than chaining my dog?

Absolutely! I’m just trying to offer advice that you may not have considered. There are a lot of upsides to a securely-fenced yard—more positives than negatives, if you ask me. Use your fenced yard well, and enjoy it as a tool to help you have a happy, balanced dog. Just be aware of the dangers, that’s all.
Thanks for reading.

*(WARNING: graphic descriptions ahead.) One of my colleagues received an email from a client who reported that her neighbor’s smaller dog managed to stick its nose through the fence separating their yards, and her dog, a large mix, tore the other dog’s nose clean off (the victim had to be euthanized). Apparently, the dogs had spent years at odds with each other through the fence, and the frustration built to a fever pitch.

The other colleague reported that a client of his had to euthanize his own dog because it pushed its head through a broken fence slat, and it got stuck. It began to scream in panic, and the dog on the other side ended up ripping its ears off. (This sounds crazy, but dogs in a panicked state often invite aggression from other dogs. Why? Perhaps it’s because high-pitched screaming sounds like prey. Maybe because despite what we want to believe, animals don’t have morals and whether they can feel compassion for other creatures who are suffering is still in doubt. What is not in question is that a panicked animal can easily become a victim.) The victim here was elderly and had lost too much blood to be saved.

ONE LAST NOTE: there’s a difference between possibility and probability. But downplaying the latter can easily slide into blocking out the former, so just be aware.