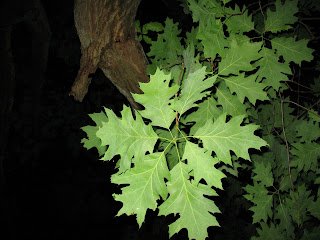 All my life I've been fascinated by trees. I grew up in what the U.S.D.A. Forest Service calls the Blue Ridge area of the Central Hardwood region. There are a number of pine trees (considered softwoods) in my yard and in my neighborhood, but luckily, there are quite a few hardwoods, too. Oaks are my favorite, especially Quercus rubra (Northern red oak) and Quercus alba (White oak). In one of my first blog posts, I wrote about my favorite trees, and I alluded to climbing them.
My love for trees began early, when I'd spend every nice day outdoors, and often alone, in the woods behind my house. There was quite a bit of undeveloped land in the neighborhood, and I'd explore it happily and safely as often as possible. My friends and I built forts from discarded branches and created walking trails in an area probably only a few acres in size, but it felt gigantic (and private) to us. Neighbors didn't mind us tramping through their "way back" backyards (they certainly never went back there), and if they did, they didn't say.
"In the woods" was where I started looking up. The trees were magnificent and plentiful, and my friends and I climbed as many as we could, but most in our woods were older and too tall for us to reach the branches. I often wondered what it would be like to perch myself high up in those branches, but I knew I couldn't fly and the idea that it was possible to get there was too wild to fathom. So I surveyed reverently from the ground, and in the meantime passed several phases of childhood in that shady landscape. "In the woods" was where I also had my first kiss (and several subsequent ones, but don't judge me--this was when "making out" was kissing and not much more), my first look at porn (1970's Playboys stashed under what someone must have thought was a hidden rock), typical pre-teen angst and mood swings ("I hate you and I'm running away!"), and many adventures jumping creeks, catching tadpoles and crawfish, and just hanging. I played softball and of course had school, but I never had playdates or structured activities that I can recall. You had to listen for the cowbell to know when Mom was calling you for dinner, and we were discouraged from being in the woods after dark, so our post-prandial play moved to the front yards and the nearly empty neighborhood streets until bedtime. 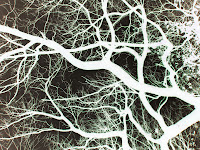 But the woods were the best. I used to fantasize that my folks would buy me a horse and I would build him a stable in the woods just behind the house ('cause, hey, I could built a rudimentary fort, so surely he could live in something like that, and he'd eat...leaves and sticks?), and I'd ride him through the trees along our trails. When I wasn't trawling the woods, I spent time in our own semi-wild backyard inside the fence. Grass never would grow in our yard, much to my father's consternation, because of the trees. That didn't bother me one bit, and I think he secretly was glad, because he had no intention of cutting them down--and he hated to mow. I climbed the one tree I could reach from the ground, a Southern Magnolia, to my heart's content and found great solace in being in the branches. It was my own special place, and I distinctly remember bolting up it through tears on the day I learned of my grandfather's death in 1977. (One of the first scenes in "Fried Green Tomatoes" always reminds me of that day.) The trees I love most and I grew up together, though they had a long head start. I still live in that house (yes, I moved away for a while, attended college and lived in a few other places--the usual "spreading the wings"), having bought it from my father's estate some 15 years ago. It holds much sentimental value for me, and the trees are a huge part of that. Though I always thought them huge, they are much taller now. And I still cannot fly, but yes, I have been in those topmost branches. 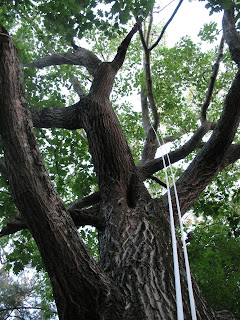 In 2004, I decided that wings were not necessary to get up into trees, and I sought out treeclimbing. I found Tree Climbers International, and wouldn't you know it, it wasn't 10 minutes from my house. Founded by an arborist named Peter "Treeman" Jenkins, TCI taught recreational tree climbing, and just happened to have a "free climb" once per month. That's where they would set the ropes, help you into your harness and give you a little tutorial, and you'd be up in the branches as quick as you please. Well, if you were 10 and skinny, that is. My overweight, almost-40 self didn't do much quickly those days, so the first climb was a bit of a disappointment. I think I got about 15 feet off the ground. But I was hooked, and I was determined to make it to a branch at some point--first at the TCI grove, and then in my own yard.
Luckily for me, TCI offered courses to teach you how to tie the ropes and get yourself up into the canopy. The techniques they use are not harmful to the tree (no spikes), and you can go as high as a few feet below the branch where your line is set. I signed up, and after a pretty grueling 2-day intensive, I was armed with knowledge (and sore muscles--but I passed the course). I purchased my climbing equipment (standard arborists equipment with some slight variations) and set out to set static lines in the trees in my yard. People often ask, when I tell them I climb, "oh, is it like rock climbing?" When I say no, they seem disappointed. Treeclimbing with ropes is not as strenuous as rock climbing, though it can be a decent workout. And the ropes get you both up and down, not just down. It's also a "self-belay" system; you don't need another person on belay, so it can be a solitary activity. We use the same carabiners as rock climbers and cavers, but the chalk, special clothes, and special shoes (some tree climbers do it barefooted) are unneccessary.
Tree climbers use arborists' rope, which is different from rock-climbing rope, because it has less "give." You can't leave it in the tree all the time, because it will rot. So if you want to climb repeatedly, you set a static line in the tree in the setting you want, using a thin nylon cord that is impervious to the elements, and you haul your climbing rope up using that line. (I actually use plastic-covered clothesline; it's cheaper than zip line). Otherwise, you have to throw the line (using an arborists' throw bag) every time, and it's a skill I am only slightly good at. I set 4 lines, two each in two trees, the white oak Zemyna in my front yard, and the red oak Hannah in the back.

So when I want to climb, it only takes a few moments to get my 1/2" rope into the tree and tie my climbing knots. Then I saddle up in my recreational saddle (the "Tengu" model at right), put on my helmet, hook on a water bottle, camera bag, notebook and gloves, and I go "on rope." I use locking carabiners to secure myself to the rope. 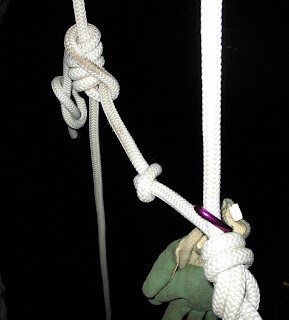 One of the cardinal rules of tree climbing is that you never unhook from your rope while in the tree. If you obey that rule and tie your knots correctly, it's incredibly safe. The climbing technique I use is called DRT (double rope technique), and it uses a very ingenious knot called a modified Blake's hitch (the topmost knot in the photo at left) to allow the climber to ascend and descend easily. You pull yourself up using your own body weight (upper-body strength is necessary, but you mostly use your legs and your weight). I use a Prussik loop on the rope with my feet in it to literally pull the opposite end of the rope downward, which sends me upward. The Blake's hitch is scooted up by hand, and holds me in position. Eventually, I reach my destination branch, and after hanging out there a while, I decide if I want to switch branches and ascend higher, or descend.
Descent is simple and fun. You just grab the Blake's hitch and apply pressure on the top of it, and gravity will do the rest. A safety knot in the rope keeps me from plummeting too quickly, and if I get to going to fast, I just let go--and the knot holds. It's pretty clever. (A single rope technique, or SRT, exists too, but it is mostly used by more experienced climbers and for really, really tall--300 feet and up--trees like redwoods. SRT requires some different equipment and skills, and I never learned how to do it. DRT works fine for my trees, which are 80-100 feet tall.) 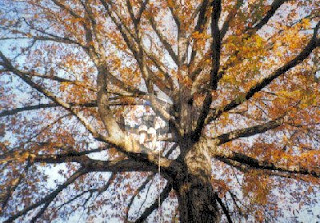 It usually takes me about an hour from the time I decide to climb to when I'm on my destination branch. I usually go to a branch about 45-50 feet off the ground when I climb Hannah. Zemyna has more copious branches and a tighter canopy; when I climb her, you have to look hard for me in the summertime. (Can you see me ->?)
And what happens when I get there? Nothing. Blissful, quiet, cool...nothing. Being in the tree is indescribable, especially in the fall when the breezes are spectacular and the sky is so blue it almost makes you cry to look at it. You hear leaves rustling and the sound of your own breathing, birds chirping, and the creak of the branches. You can see your neighbors mowing their lawns or strolling by, and they can't see you (because they don't look). I admit that I like to call my dog and see how she'll react; she's not the brightest bulb in the chandelier, so she usually looks for me for quite a while before forgetting I exist (until I come down, and she has this relieved and puzzled expression I take to mean, "I thought I heard you calling me!"). 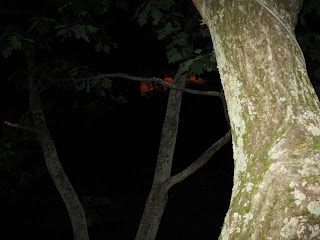 Dusk is lovely, and climbing at night is even more thrilling. I haven't yet slept in the tree, though several companies make hammock-type apparati for doing just that. I'd like to put a semi-permanent pallet in Hannah, if I can figure out a way to do it without harming her. I have a Sky Chair that I will haul up and clip into a setting placed just for it. It's a great place to read or write or just think, which I do a lot of.

"Murmuring out of its myriad leaves, Down from its lofty top rising two hundred feet high, Out of its stalwart trunk and limbs, out of its foot-thick bark, That chant of the seasons and time, chant not of the past only, but the future." ~Walt Whitman, from Song of the Redwood Tree 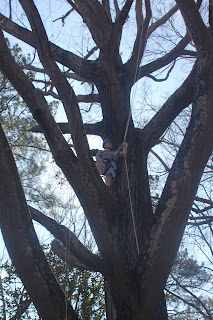