It appears that originality has gone out the window when it comes to pet names.

I, for one, am greatly saddened by its demise.

Your child may be shunned for life if given some ungainly name, but your dog probably will not (as long as the name is positive). Naming your pet is about the only time you get to be creative with names. So why settle for Max or Buddy or human-centered names, especially when there are so many great possibilities inspired by foodstuffs, literature, cinema, history, art, and life? What happened to naming dogs after their best (or worst) character traits? Some of the coolest dog names I have run across are competition dogs, especially agilty dogs or frisbee dogs. The dogs have a joi de vivre, and so do the names.

Creative types name their pets to give them something to live up to. So do racehorse owners.

It doesn't take much imagination to figure that the human-centered naming trend is a direct reflection on how we feel about our pets. More and more, they are true family members. This is, in general, a very positive trend, but that doesn't mean we have to name them bland, boring names that every other dog at the dog park, daycare, obedience school, community pool, or arcade will be sporting. Get creative, people! I want to see more Grumblepants, Gullivers, Grundys, and Peabodys. What's wrong with McGillicuddy, Mortimer, Bixby, or Kismet? Why settle for Sam when you can say Sasquatch? Max is so common--why not Marlowe, instead?

During my high school, college, and just-graduated years, I shared my life with a beautiful Doberman pinscher, a breed that I am still quite fond of. The future English teacher in me already loved Shakespeare. I remember sitting at the table with my very literate Pop one night discussing possible names for my new puppy. She was, as puppies tend to be, gangly and goofy. But I knew she would not always be so. And I wanted a name to reflect her future pride, her beauty, her intellect, and her...sense of justice? To me, she had to be Portia. And so she was, for 13 years. And I'll never use that name again.

(That reminds me: what's with the naming of all successive pets the same name the previous pets had? Sometimes you get a II or a II or a IV after the "Buddy," but, more often than not, you don't. I think some folks just figure they are going to call the dog that name anyway, out of habit, so why not? It stands to reason that they should only date people with the same names of their exes, too. Just so things don't get too out-of-hand at a romantic moment.)

And on that note, there are these folks, who really won't forget their partner's names.

But as far as our pets go, names are definitely personal, and I certainly don't want to disparage those to whom Sophie, Max, Sadie, Molly, Murphy, and Henry are special, meaningful names. Sometimes, it's simply about convenience, too. If you adopt a pet who already knows that name, it's easier to keep it than to try to start afresh, especially the older the animal. 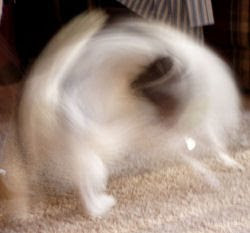 No one who knows her has to ask why my black and white JRT mix (seen at right) is named Whirling Dervish.

Sometimes, it's a name we've been wanting to pin on someone, sometime--we've had the name in our head for years, and were just waiting for the perfect animal (or newborn babe) to fill it. I have a list of names for future pets, and it grows almost on a weekly basis. (I dare not share it here for fear of it being usurped. I simply will not name my next dog "Magnhild" if someone else I know has a dog with that name. It will SO look like I copied.)

In short, I believe pet names should cover 3 bases. A good name:

1. Is unique, and/or special to the owner

2. Fits the animal (looks, characteristics, etc., though I will admit I prefer ironic names when it comes to looks, e.g. "Snowball" for a black cat...and I once had a white cat named Aunt Jemima.)

3. Is a positive representation of the pet, and the owner (please, no "Homicide," "Hitler," "Pol-Pot," "Massacre," or other criminally-inspired/dictators-we'd-rather-forget names). Have some respect.

4. Did I mention unique?

There are so many possibilities out there. Get creative! If you are a foodie, go to the library or the Barnes and Noble and skim through The Food Lover's Companion for good ideas. Anyone for "demitasse"? "Delmonico"? How about "Papillote" for a small white dog with pointy ears? (A Papillote is the French word for a paper frill used to decorate the tips of bones.) "Jicama"? A mandelbrot is a thin almond cookie. "Togarashi" would be a good name for a reddish small dog with a lot of gumption; it refers to a small hot red Japanese chile. 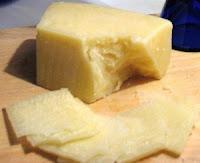 You like cheese? There are lots of good cheese names that fit pets well ("pecorino," "muenster," and "havarti" are a few possibilities). If you are a wine connoisseur, or like whiskey, you also have a lot of options. Fish and meat names can be fun, too. Anyone for Mullet? Schnitzel? Spotted Dick?

Into the Arts? There are endless possibilities. You can name your dog after an artist, composer, writer, dancer, or any actual work of art. Personally, I'd avoid a name like Napoleon's Nose, Transformed Into a Pregnant Woman, Strolling His Shadow with Melancholia Amongst Original Ruins (yes, it's real, and actually a good representation of the man's genius), But "Napoleon,""Dali," or "Salvador" would work.

Likewise, String Quartets 1-6, Opus 18 is a bit ungainly, but "Amadeus" or "Wolfgang" could be cute. One of my co-workers has a dog named "Wagner" (rhymes with tag her), but I cannot resist pronouncing it "Vahg-ner" and belting out a few bars of Götterdämmerung every time I see him.

The Wirehaired Pointing Griffon at left is named Drummer. Cute name in and of itself, but better if you know he lives with two other dogs named Harper and Piper. (Well, his owner and I think it is cute.)

I have a dog named after a pickle, and one after Jack Black's character in "School of Rock." I WILL have a Dr. Seuss-inspired name one day for a dog. And an Edward Gorey one. And another inspired by the Bard. (That's a lotta dogs. I'd better get busy.)

"From there to here, and here to there/Funny things are everywhere."
Written by Mailey E. McLaughlin, M.Ed. at 5:50 PM