Should I Get My Dog A Dog?

There is a tongue-in-cheek suggestion often given to Women Who Do Too Much (you know, the ones ferrying the kids everywhere, planning meals, shopping, working, doing laundry, and multiple other tasks while trying not to stress out).

Their friends, co-workers, and even family will jokingly suggest, "You need to get yourself a wife."

For some reason, I thought of that joke as I was writing this. Let's look at this scenario (minus the ferrying, shopping, planning, doing laundry, etc.) from the perspective of the "average" dog owner.

Many people who only have one dog often feel guilty, and worry that they are depriving their pet by not having a playmate for him. I am often asked if they should get a second dog to keep their dog company, and my answer is “it depends.”

Dogs are indeed social animals, and most enjoy the company of other dogs in addition to humans. Their innate sociability is why they make such great companions for us, and why they are relatively easy to train. But are we depriving them if we only have one in our home? 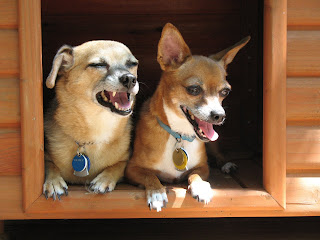 Before you rush out to get Rover a pal, ask yourself the following questions, and consult a qualified trainer if you are not sure.

Is Rover 8-9 months or older? Raising one puppy is hard enough; don’t make it harder by adding another dog before Rover is housebroken, at least somewhat trained, and bonded with you. This is one reason out of many why most canine professionals agree that adopting 2 puppies together is a bad idea. And adding a “non-puppy” may not be much better; any age dog that is new to your home will still need training and time to settle in.

Is Rover obedience trained? If he isn’t, you will have a much harder time training 2 at once. And dogs learn from other dogs, but not usually good habits. So fix Rover first, for best results. Otherwise, you may end up with twice the trouble.

Are you getting Rover a pal because you don’t spend enough time with him? This is a common mistake people make, and what you end up with is two dogs you now do not have time for. Dogs may love each others’ company, but they typically love us more, and dogs don’t raise other dogs—people do. If sociable dogs had their pick between “another dog” and “more quality time with owner,” most would pick option 2. Seriously.

Does Rover really like other dogs? This sounds like a no-brainer, but you’d be surprised how many people have dogs who really have little interest in other dogs who rush out to get Fido a friend. Does Fido go to the dog park, or to daycare? If so, does he play well with others (as opposed to just tolerating them, or worse)? Maybe he likes certain kinds (and breeds or sizes) of dogs, but not others. Not every dog loves every other dog he meets. We don’t expect that of humans, so why do we expect it of dogs?

Being a social species does not mean that one likes every other member of the species; I'm sure you know this from, like, life (do YOU like everyone you meet? Humans are a social species...if you answered no, then why not?) You might be amazed at how many people are truly troubled that their dogs are simply nonchalant about playing with other dogs. They get very offended when they go somewhere with dogs and their dog prefers to hang out with the owners instead of running around with the other dogs. Of course, there are plenty of reasons why, but the bottom line is that those dogs, as long as they are not aggressive or overly stressed, are perfectly happy that way, and there is nothing wrong with them!

Is Rover "protective" of you? Maybe you've noticed that Rover gets "weird" when other dogs approach you in the dog park. Maybe your friend's dog was visiting once and Rover "didn't like it" when that dog would come over to you for petting or attention. Sometimes this is mild, like
pushing in between you and the other dog, as if to push the dog away from you, or trying to grab treats or toys before the other dog can take them from you. (Both of these are annoying, but if they are the extent of the possessiveness, and do not turn into growling or fighting, you can fix them fairly easily.)

But if Rover's possessiveness is stronger, such as he growls, snaps, or bites when the other dog is close; lunges at or attacks the dog when it moves into your space, or attacks the dog over resources like toys or food, Rover will need some behavioral intervention before you bring another dog home. If you can't get a handle on this problem with professional help, you shouldn't add a dog to your household, and if it is pronounced in public, you should be very cautious when taking him to off-leash spaces where you have less control.

Some dogs are fine with other dogs in public situations like dog parks and daycare, or even in homes that are not yours, but definitely will NOT tolerate another dog living in their space. Technically, it's your decision to whether you will have another dog, not your dog's--but if you are constantly having to correct and separate them, or worse, break up fights, why put yourself and the dogs through that? It's a stressful way to live for both humans and canines, and someone is going to be hurt.

If your dog blatantly tells you that he wants to be the only dog in your home, your responsibility is to him first and foremost. Ignoring his temperament in this aspect could be costly, dangerous, and emotionally devastating. Enjoy him for who he is, and if he likes other dogs in public, give him that outlet if you can do so safely.

Are you really ready for a second dog? You know he won’t be as easy as Rover was, don’t you? The law of averages says that if your first dog (or child) was easy to raise and train, the second one will be just the opposite. Are you prepared to do the work? Whether you get a young puppy or an adolescent or an adult, all dogs need to learn the rules of your home when they come into it. Prepare for a lot of work, and be thankful if it isn’t as hard as you expected.

Adding a second dog also adds costs, from food to travel plans, to how big of a car do you have, and do you have room for another crate?

Ultimately, getting a second dog is a personal decision that must not be made lightly. For most people, after training, having a second dog isn’t much harder than having one (though adding a third definitely ups the stakes). Being left alone is not as lonely for Fido  (once they have both earned the privilege to be loose in the home), and watching 2 dogs who like each other interact can be very enjoyable. Plus, you are helping a dog that needs a home. So, the positives are definitely there.

The best short answer to the titular question is this: don’t get a dog for your dog. Get a second dog for yourself when you are ready (after it has met and gets along with your dog, of course), and chances are the dogs will also benefit from the arrangement.

If you are going to take the plunge, here are some suggestions.

Try to choose a dog of the opposite sex, and if your dog is 2 or older, go younger (it doesn’t have to be a baby, though). Know your dog's personality and try to get a dog that won't clash with it. Ultimately, though, get the dog you want to have--the one you are best suited to raise and train and live with for the next 10-15 years. Consult a trainer to accompany you to the shelter or breeders' place if you are not sure; there are no guarantees, but someone with a good eye for what "getting along" looks like can be immensely helpful in this process.

Take your time and make the right decision; there's no need to rush.

Establish rules and structure right away for the new dog ('cuz your existing dog already has them in place, right?) and be prepared to feed separately for best results. Of course, the new dog needs his own crate. 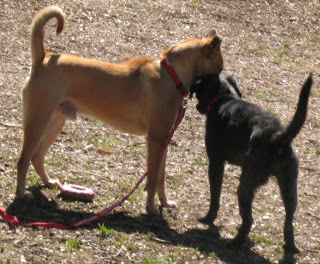 NOTE: just because your Fido and new Rover got along at the shelter, don't expect pure, unfettered harmony at home--at first. Space is a dog's primary language, and when a new dog comes into an existing dog's territory, there is bound to be a little friction (especially if your house or yard are small). Let them drag leashes at the first meetup, and later in the home until you are sure they understand what's expected of them. Tight leashes promote frustration and reactivity.

In the above photo, what do you see? A happy greeting? Notice the raised tails, the raised hackles on both dogs, and the way the brown dog is hovering above the black dog. Without a dog-savvy adult nearby, this could have turned ugly. The obvious positives of the above situation: outdoors, with plenty of room to move; the dogs are not squared off, but perpendicular; the dog with the most potential for problems is dragging a leash. Just after this was taken, I called the brown dog and he turned towards me, breaking the "stalemate." The black dog was relieved and trotted off. I had a close eye on the brown dog after that; there were other dogs in the yard, and he was wary of all of them, but he was never given a chance to posture that way again due to sharp human intervention. After he calmed down, he even played a bit.

Harmony between dogs in the home is always easier with good, clear leadership. There will be less squabbling if you have made it clear that you will not put up with fighting. If you are having a problem, keep them separated for safety, and consult a trainer who will approach the problem from multiple angles if need be (not with force, and not with only treats).

Initial training is easier with fewest distractions, so any training you do should be one dog at a time for now. Crate the other dog while you work, then switch them. As they get better, use the other dog as a controlled distraction.

Having multiple dogs can be, and more often than not, is, a fantastic experience. Just don't rush into it, as it is a 15-year commitment, and make sure your dog would love the idea.

"Old age means realizing you will never own all the dogs you wanted to." ~~Joe Gores
Written by Mailey E. McLaughlin, M.Ed. at 3:45 PM

Email ThisBlogThis!Share to TwitterShare to FacebookShare to Pinterest
Labels: dog training, dogs, having 2 dogs, new dog, should i get my dog a dog