How do you gestate?

Eric Booth, in his book The Everyday Work of Art, defines gestation as a pause to "reflect, step back from action, to allow intuition and other wordless inner processes to perform their roles" and considers it a necessary part of decision-making and what he calls "world-making." It occurs mostly under the threshold of our attention, in our subconscious.

In dog training, we would put the dog in his crate after a working session to help him calm down and "ponder" what he'd learned. It seems odd that a dog would think about what just occurred, but many trainers find that this does seem to make a difference. It also serves to make training more interesting, as the dog sees it as a chance to be out of the crate and be with his humans. 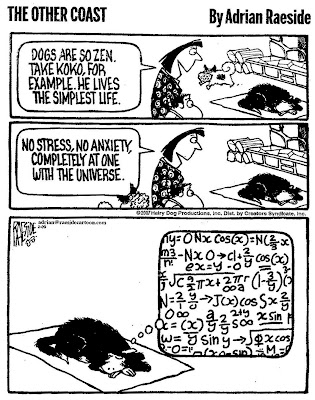 In contrast, working the dog and then letting him play all the rest of the afternoon with his doggy pals won't allow him time to gestate his new knowledge. Plus, playing with other dogs often supersedes "boring" time with humans doing exercises, so a "green" dog who has not developed a full relationship with his owner or handler will prefer the playtime to the person, thereby making said person a little less relevant.

I have had prospective clients tell me that they take their dog to daycare 3, 4, or even 5 days per week. Usually, this is a daycare that does not meet my standards, and the dogs play all day long. The dog's owners tell me that the dog doesn't seem to give two squirts about them when he's home, and he doesn't listen.

Well, who can blame him? His owners are so far removed from his life that they have become irrelevant. The same thing can happen sans doggy daycare, with owners who won't confine their dogs, ever, and allow them to do whatever they want to do save for the few minutes a day they ask the dog to sit or lie down for some reason.

Having a dog should not be about simply perfunctorily going through the motions to satisfy his needs for food, shelter, and exercise. It should be about developing a relationship, and a bond. Owners who pass off Rover to daycare too often find that being less relevant is not very much fun. (And yes, there is a case to be made for a correlation to nannies raising the children of the rich, but I decided not to go there.)

Gestation doesn't only help dogs to learn. It helps us.

Regardless of what the situation is, I can almost always see the problem much better after I have put it away and ignored it (and I mean ignored it completely) for a while. Sometimes, gestation results in a "Eureka!" moment, and I realize I've just discovered some new way to look at it, which is great fun--even if that doesn't solve the problem.

Sometimes, sleeping on it is the answer. I have also meditated on it, taken a walk on it, written on it, read on it, lain on my back and looked at the sky on it, climbed a tree on it, watched a movie on it, gone to dinner with friends on it, or listened to a favorite orchestral piece of music on it (I think the fact that a symphony or a movie score comes full circle and resolves itself has a lot to do with that working). Every now and again, a bourbon on the rocks will do it, but I drink pretty infrequently, so that's not something I go to right off.

Booth says, "Dreams (of the day or night variety) do not travel the way the crow flies; they zigzag like a butterfly. These tools of gestation go to deep places our intuition would like to tap, to worlds we know, unbeknownst to ourselves."

What about you? When you are faced with a thorny conundrum, how do you gestate? And how long does it take? Is it different depending on the issue? Do you find that skipping gestation results in a degraded solution? Has it ever not worked?
Written by Mailey E. McLaughlin, M.Ed. at 9:45 AM