What are you laughing at?

If you had told me 10 years ago I'd own Chihuahuas, I'd have laughed at you. I now own 3, plus 2 other small mutts. All are shelter adoptees.

I have nothing against the above breeds, but I am a real dog trainer, and I have small dogs. And I am hooked.

For one, my dogs are incredibly portable. I can fit all five easily in crates in my van, with room to spare. Many of my trainer friends have to car shop with specific prerequisites in mind for how crates will fit.

Small dogs are cheaper to own. Food and preventative medicine is cheaper. Dog beds, collars, leashes, and training aids are cheaper. Cheaper is good. Because when you have multiple dogs, things get expensive. And I am a cheapskate.

Smaller portions of food=smaller poops. I can take one newspaper bag on a walk with all 5 dogs and not fill it up.

Small dogs (with some notable exceptions like terriers) need less exercise. This is especially nice because I am lazy during my leisure time. Sure, I like to hike and do stuff, but I also like to do things without my dogs (which is another black mark on my dog trainer resume). And they are OK with that--they'll just nap.

Small dogs take up less space. My partner and I share a queen size bed with 4 of our dogs (the 5th is weird and prefers to sleep under the bed unless Jupiter is in retrograde on a Thursday night). They all sleep under the covers, and we still have room. Try that with 5 Malinois. 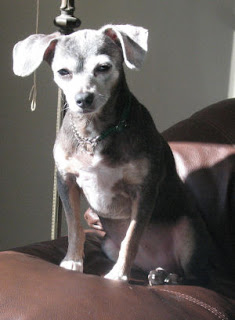 The "less space" thing is also handy around the house. It allows us to have more furniture. I never trip over sleeping dogs in the middle of the living room.

Part of the reason I don't is because small dogs get out of your way when they notice you are coming. Larger dogs that have been trained do, also, but it often takes them longer to get going, especially as they age. One of my cardinal rules when it comes to training is "never step over your dog; gently but firmly make him move." I never have to make my dogs move--they are on high alert to Get The Hell Out of the Way or get stepped on by clumsy humans.

And don't let some macho dog trainer tell you he doesn't ever cuddle with his dog. He does. Besides, most pet dog trainers are women, and we need the oxytocin dump as much as our dogs do. We don't overdo it, because we know that there is such a thing as "too much of a good thing." Petting and cuddling are an important part of having dogs, but they should not be the only part, or even the biggest part. 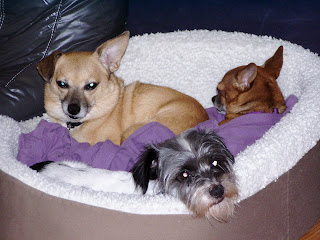 My dogs don't slobber. They love to eat, but they do it very neatly (and on a schedule, of course). When they lick you, it's not sloppy. My dogs never have strings of drool hanging from their mouths.

Chihuahuas are smart, and catch on quickly. I used to think they were all nasty ankle-biters, but that was before I was a trainer. Who knew they just needed rules to follow, and proper socialization, just like "real dogs"? Now I do. And I spend a fair amount of time convincing non-trainer small-dog-owners of this, so that their dogs do not become nasty ankle-biters.

Some people laugh off the idea that small dogs are every "truly" aggressive. They giggle when Poopsie the tiny Shih-tzu challenges Thor, the passing 90-lb Lab mix, snarling and lunging on the leash. "Isn't that cute?! Look, Myrtle, at the tough little guy! Give 'em hell, little guy!"

This irks me. Small-dog owners are just as liable for their dogs' behavior as large-dog owners are. Just because Poopsie is small and cute does not excuse that rude behavior, and if Thor decides to stop showing restraint, Poopsie will be in a world of hurt, or dead, and any onlookers will be horrified at the carnage. And both dog owners will share the blame: Poopsie's, for not teaching her manners on a walk, and Thor's, for not properly restraining their dog.

But Thor's owners will probably be held accountable, while Poopsie's will not. As I am a small dog owner, you'd think this would make me happy, but I'm a dog professional, so it absolutely does not. All dogs need training, period. Dog owners who refuse to train, and who keep dogs that are aggressive to people and other animals--regardless of size--are irresponsible.

Training provides dogs--a social species--with a blueprint of how to fit into human society. Without this blueprint, dogs do not thrive. Seeing toy dogs stuffed into purses and strollers annoys me in several ways, but mostly because I know that those dogs are not able to truly be dogs.

My dogs sometimes roll in stinky stuff. They have great noses and they use them. They keep squirrels out of the yard with great pride. They know lots of basic commands, including "heel," and lots of tricks--most of which they will happily do with or without treats. They frolic in the grass, get dirty after it rains, chase and fetch, and in every other way act like dogs much bigger than they. As long as conditions are safe for them to be on the ground, they are.

Sure, there are drawbacks--besides the snickers. I have to watch out for birds of prey, people's clumsy feet, crowds, large dogs. The Chihuahuas cannot run or even walk as long as I might like to, because they get tired. Their limbs are more fragile, and they don't deal well with cold weather. They can get nervous if people shriek and run towards them or try to pick them up (why anyone would assume it's OK to pick up a dog without asking and hold it up to her face I'll never know). Most people don't try that stunt with German shepherds.

(In high school and college, I had a Doberman. She was a lovely dog with a wonderful temperament, despite the fact that she was not formally trained. When I'd walk her in public, people would yank their children up and over to the opposite side of the street as we approached, even though she walked nicely at heel and paid them no mind at all. Naturally, I was offended, because I knew she'd never hurt anyone, and I wasn't wise enough to know what I now now about cynophobia. At any rate, I solved the problem by outfitting her with a bright, colorful bandanna. The change in people's reactions was almost immediate: my "vicious" dog now garnered appreciative looks and compliments, and parents actually allowed their children to approach for petting.) 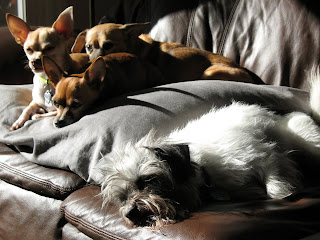 They may be small, but their hearts hold as much love as any big dog's, which is really the important part. They are bona fide canine companions, albeit in smaller, more efficient, longer-living, smaller pooping, no-slobber packages that make great bedtime heating pads on cold days.

Scoff if you wish, but maybe one day you will know the joys of a good lap dog.
Written by Mailey E. McLaughlin, M.Ed. at 9:10 PM